Whether its images, music, videos or applications we know that the most important stuff on people's phones is stored in the user memory.

The reported 8GB of user memory is partitioned into two bundles:

To see how much device storage is available for use, perform the following steps: 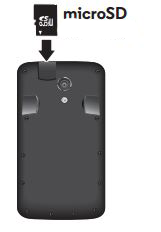 Important Note: SD cards are not "hot-swappable" >> The phone has to be turned off to safely remove the card.

To see how much internal storage is available for use, perform the following steps:

Moving Media to the SD card

When inserting a SD card post-purchase, your device will help you free internal storage by offering to move pictures, movies and music stored internally to the SD card, through the Move Media application. Move media will only move content which is safe to move: pictures, movies and music. Items are moved from internal storage to the card, and are moved to the same location on the card. As an example, a picture stored on your internal storage at this location :  /sdcard0/DCIM/MattJones.JPG will simply be moved to /sdcard1/DCIM/MattJones.JPG (on the SD card). Content will still be visible to media consuming applications (Gallery, Music) after being moved.

The Move Media dialog on card insertion will only displayed once for each SD card, and only if there is content to move. You can invoke it manually from storage settings at any time.

Configuring the Motorola Camera application to store pictures, movies on your SD card

When an SD card in present, you can set the card as the default storage location for your pictures from the camera application.

Out of the box, captured pictures and movies will always be stored on internal storage.

You can find this setting under the “Storage location” icon in the camera app settings. This setting will only appear when a SD card is present in the device.

Installing or Moving Applications to your SD card

Some applications are getting quite large. For your device, we have enabled the ability for a consumer to install and move applications from internal storage to his SD card. Applications moved to the SD card still appear in the apps tray, and runs.

The “On SD card” tab, under Settings ->Apps displays the list of applications which can be moved to the card, as well as these already installed on the card.

You can move each application back and forth through each “app info” settings view (“move to SD card”). Please wait until each move has completed before exiting the App info panel.

One of the developer options (available in Android 4.4 and later) allows applications the ability to decide to store content seamlessly on either internal storage OR an SD card. The first two applications using this functionality are Play Music and Play Movies, both preloaded apps on your device.

If you have a SD card inserted in your device, Play Music lets you select the SD card as the storage for your music cache, downloaded or purchased from Google Play music. This setting can be found under the application settings -> storage location. Play Movies offer a similar option.