How to properly charge the moto x4


If you are just setting up your moto x4 new batteries are not fully charged. Plug the supplied battery charger into your phone and an electrical outlet. It may take several seconds to start charging the battery.

If your battery is completely discharged, it may take several minutes for the device to begin charging.  The battery needs to charge to a minimum voltage before the system can boot up, and this may take a few moments to achieve.

It is best to use the Motorola charger that came with your phone.  Chargers have different output capacities, and a weak charger will take longer to charge your battery.  If you are using the device heavily at the time, it may be possible for a weak charger to fail to provide enough energy to actually charge at all.

Ensure charger is inserted completely into your device

Your device may recognize that a cable is inserted when it is partially plugged in, however it will not charge. 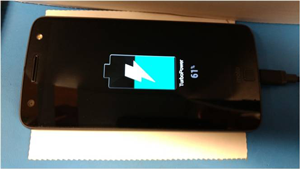 Moto X4 shows TurboPower connected initially, but does not continue to show TurboPower on the screen.

During initial set up of your device, once you have added your accounts (Google and any others) your device will typically transfer significant data while it initially synchronizes your accounts and updates applications from the Play Store.  Your phone's battery may drain faster than usual during this initial update and sync session. After the initial sync, and a few charging cycles, your battery will reach its maximum capacity.  We strongly recommend keeping the phone attached to the charger during the initial sync.

It may take several charging cycles for your battery to reach optimum performance.

When your device is turned on and you are charging, the battery icon in the top notification bar will show the charging indicator, which looks like a lightning bolt inside the battery.

When your device is turned off, the charging indicator will be in the middle of the screen looks like the outline of a battery.  You may need to briefly press the power button to activate the screen.

We suggest charging each night so you start the day fully charged and ready to go!

Your device will warn you when its battery is getting low, first when the charge remaining falls below 15% of its capacity, and again below 5%.  When you see these warnings it is a good idea to charge as soon as you can and/or stop usage that could wait for a later time.  For example - and depending on your circumstances and priorities - you could enter airplane mode to stop all radio transmissions, or stop applications that use a lot of energy (such as navigation or streaming applications).

Click here for more suggestions on how to extend your battery life.